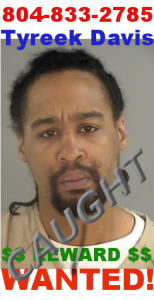 Update: Fugitive Tyreek Davis was brought into custody at the Henrico Jail on Thursday, March 15,2018. He awaits trial and all previously outstanding bonds have all been revoked.

Tyreek Davis’s date-of-birth is 10-08-1983. He’s known to reside in New York, Newport News, and Richmond. He’s shown himself to display very confident and engaging personality; however, his deeds has proved to not match his rhetoric. [ In other words, he’s full of crap! ]

Please call Aarrow Bail Bonds at 804-833-2785 if you have information on Tyreek Davis. If your information leads to apprehension, a cash reward will be paid.