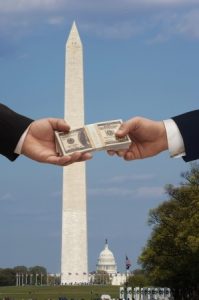 I’ve liked Rand Paul for some time. I’ve often supported his libertarian-leaning stances on various issues, including his criminal justice reform attempts like the REDEEM Act, where he and Senator Corey Booker sponsored a bill to incentivize states to ease up on non-violent felony offenders. However, he’s apparently gone off his libertarian/constitutional conservative rails with his latest dabbling into criminal justice reform with this bail reform bill.

He teamed up with California Senator Kamala Harris to introduce a bill which is being sold as helping the poor. In reality, it would be another impediment to the poor and everyone else who is arrested and placed in the tentacles of pretrial services. If passed, it will have a disproportionate negative impact on low-income minorities.

Why the Bail Reform Bill is a Bad Idea

The bill would provide federal funds to states to fund the growth pretrial agencies and curtail, if not end, commercial bail. Like so many other government programs sold as popcorn and lollipops which end up hurting those intended to help, this one is a real stinker, and here’s why:

1. The Implementation of Pretrial Services Ends the Principle of ‘Innocent Until Proven Guilty’

When defendants are arrested and placed in pretrial services, they are effectively on probation prior to trial and with no findings or admission of guilt. Based on the charge, they will be forced to perform one or more of the following:

If defendants are assumed innocent, why are they being punished before trial?

When defendants fail any of the prescribed conditions, a warrant is issued and the defendant is slapped with another charge. This is the most insidious aspect of it all.

2. Pretrial Services – It Entraps People in the Criminal Justice System

Just like probation, when defendants are assigned to pretrial services and don’t comply with the prescribed requirements, another charge is brought against them and warrants are issued.

For defendants who have a genuine drug addiction, it’s for this reason why pretrial services is perceived to exist solely to keep people in the system indefinitely. It is very difficult for an addict to get through these without getting at least one additional charge because of the drug testing.

Another aspect of this is that a judge will always consider past and present charges when making a ruling. With that in mind, when defendants are placed in pretrial services, they’re trapped and have no choice but to comply. If they don’t comply, it will most certainly negatively impact the case. So, the verdict of the original charge is now dependent on the compliance to pretrial services, which is actually irrelevant to the defendant’s guilt or innocence to the original charge.

Jumping through these pretrial probation hoops imposes both direct and indirect costs to the defendants. For most states, if not all, SCRAM bracelets, GPS monitors, or car breathalyzers are NOT free to the defendants. Car breathalyzers typically cost around $100 for installation and $50-$100 per month. SCRAM bracelets and GPS monitors can cost between $50 to $100 for installation and anywhere from $5 to $15 per day or $150 to a whopping $450 per month.

When defendants are required to attend classes, they are required to pay for them. For example, VASAP (Virginia Alcohol Safety Action Program) costs about $100 per class with entry level requirement of 10 classes, which comes to $1000 over 10 weeks.

The indirect costs are staggering; I’ve had clients lose their jobs because of pretrial services. Defendants are required to take time from their jobs to check in with pretrial services. The lost pay and travel expense can be debilitating. For the poor, this often translates to numerous future contempt of court violations. I had one client who lived about 15 miles from court. With her residence not being on the bus line, she was unable to get to pretrial services regularly so she ended up with more charges. It wasn’t because she willfully disregarded the court, it was because she didn’t have the financial means to check in.

4. When Bail is Removed, Defendants Pay the Bureaucracy

Four states, Oregon, Kentucky, Illinois, and Wisconsin, have banned commercial bail. However, they did not remove the 10 percent bail fee for defendants given a bond. Rather, that 10 percent is paid to the local jurisdictions. In fact, an additional mandatory fee, which can range from $25 to $75, is also required to get out of jail.

This differs with commercial bail in that the 10 percent fee is returned to the defendant after the case is closed and the following conditions are met:

• defendant attend all court dates, and
• all jail and court fees and fines are paid.

These four states are simply collecting a prepayment for court costs and fines. While it was sold at benefitting the poor and minorities by removing the burdensome costs of bail, the lawmakers of these states put in place a program which is more financially oppressive than the previous arrangement of commercial bail.

How does this benefit the poor if the 10 percent is still required? With the fees, it’s often more costly than with commercial bail as many bondsmen don’t charge an additional fee. Also, many bondsmen will work with the defendant’s family for the payment, not requiring the entire 10 percent up front and allow a payment plan. That can’t happen with bureaucracy in charge.

While the anti-bail crowd pat themselves on the back about how they’re fighting for the poor on this issue, they don’t have a problem when the state places undue and unjust burdens on the poor. This is just another example of how these charlatans exploit the poor for their own selfish agenda. It’s unfortunate that Rand Paul has joined this unscrupulous crowd and placed himself on the wrong side of this issue.

Make no mistake, the progression of pretrial services is simply a government takeover of the bail industry. It’s more costly and less efficient than commercial bail and continues to prove to negatively affect communities, sheriff departments, and especially defendants. It’s being advanced with fraudulent arguments and dressed up in good intentions.

With federal money being allocated to jurisdictions to pay for pretrial services, the federal government is choosing sides for what should be left to localities to decide. It’s an offense to libertarian / constitutional conservative principles of which Senator Paul claims to adhere to.

Senator Paul has often articulated how the federal government’s involvement in local affairs creates more problems than it solves. By co-sponsoring this bill, he’s advocating doing just that while abandoning his position as the constitutional conservative senator he often portrays himself to be. Let’s hope he doesn’t continue on this path toward the expansion big-government, harmful policies.