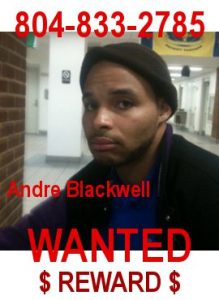 Fugitive: Andre Blackwell for failure to appear in two jurisdictions.

Andre Blackwell is currently a fugitive from justice after jumping bond in the jurisdictions of Virginia Beach and the City of Richmond for felony and misdemeanor probation violation offenses. He’s believed to be residing in Richmond, sponging off of relatives and friends. He jumped bond on relatively minor charges. He’s proved himself to be not very smart. He’s also shown that he’s willing to allow his wife to go through paying the costs of his failure to appears charges, even while she’s working and raise their two small children.

His last known address is Meadowdale Blvd, Richmond, VA 23234. If you have any information, please call 804-833-2785. If your information leads to a him being caught, a cash reward will be paid.

Andre Blackwell failed to appear in the City of Richmond Circuit Court on Jan 30, 2014 for a probation violation charge. His bond amount for this charge is $1500. This was just a hearing. That he chose not to go to attend this court date shows he had no intention of fulfilling his obligation to his wife and the bail bondsman.

Andre Blackwell again failed to appear in the Virginia Beach Circuit Court on Jan 31, 2014 for a probation violation charge. His bond amount for this charge is $1500. The Virginia Beach court house is just under two hours from Richmond. His excuse was he couldn’t get a ride to Virginia Beach, so now he’s wanted for two failure to appear charges.

Please call 804-833-2785 if you have information on Andre Blackwell. If your information leads to apprehension, a cash reward will be paid.