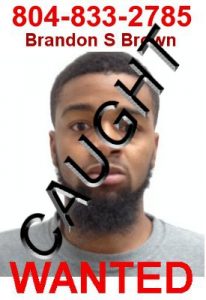 Last August, it was posted that Brandon Brown skipped his court date in the Richmond City Circuit Court on August 25th, 2015 on felony drug charges.

It was also noted that Brown was wanted by the Richmond City Police Dept for arson and attempted murder.