Fugitive Mark Davis was brought into custody at the Hanover-Pamunkey Regional Jail on Tuesday, September 4th, 2018. As of this writing, he awaits trial without bond. 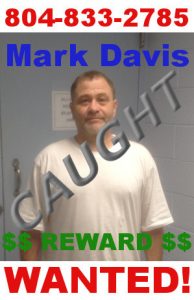 Mr. Davis resides in the Greater Richmond, Virginia area, particularly in Highland Springs. He may also be residing in Sandston, Charles City, New Kent, or Chester. He also has ties to Florida.

His personality seems to be easy-going and affable. However, after dealing with him as a bondsman and having interviewed some of his associates, there seems to be three things about him which stand out:

If you have any information, please call Aarrow Bail Bonds at 804-833-2785. If your information leads to his apprehension, a cash reward will be paid.