Update! Fugitive Gary Johnson was brought into custody of Chesterfield County Jail on Thursday, November 8th, 2018. As of this writing, he awaits trial without bond on multiple felony and misdemeanor charges. His court date is set for December 11, 2018 at 1:00 P.M.

Fugitive Jamie Boggs was brought into custody of the Riverside Regional Jail on Tuesday, November 6th, 2018. As of this writing, she awaits trial in the Chesterfield General District on multiple felony and misdemeanor charges. Her court date is set for December 5th, 2018 at 11:00 A.M. 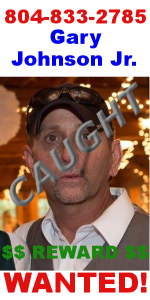 Fugitive Gary Johnson failed to appear in the Chesterfield General District Court on June 30th, 2018 on felony grand larceny and breaking-and-entering-dwelling-to-commit-assault-and-battery charges. His full name is Gary Benson Johnson Jr. and his date-of-birth is 06-04-1967.

From dealing first hand with Johnson and speaking with his associates, be aware that he talks and extremely good game but is NOT good for his word.

Johnson is known to reside in Chesterfield with his girlfriend, Jamie Boggs. Ms. Boggs is also wanted in Chesterfield after failing to appear on various pretrial violations and theft charges.

If you have any information, please call Aarrow Bail Bonds at 804-833-2785. If your information leads to Johnson’s apprehension, a cash reward will be paid.