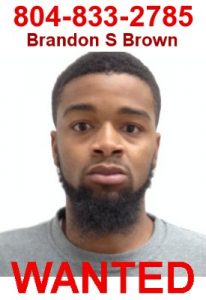 Brown has also caught the attending of Richmond Police. From a story on WTVR 6 about Brandon Brown, Brandon Brown is wanted by the Richmond Police for arson and attempted murder. The incident occurred on August 9th on Clarkson Road, where Brown had apparently started a fire in the living room by igniting a mattress and box spring. However, he had apparently locked his girlfriend inside a different room in the apartment by jamming the door, making it difficult for her to escape. The woman fortunately managed to escape unharmed.

Although proving himself to be not very smart; infact, very much of a dumbass, Brandon S. Brown should be assumed to be dangerous.