Time to lighten things up a bit again with some criminal justice humor. Hope you enjoy some these jail jokes. 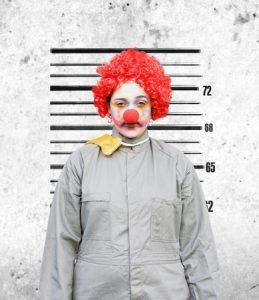 A prisoner in jail receives a letter from his wife: “Dear husband, I have decided to plant some lettuce in the back garden. When is the best time to plant them?”

The prisoner, knowing that the prison guards read all mail, replies in a letter: “Dear wife, whatever you do, do not touch the back garden. That is where I hid all the money.”

A week or so later, he receives another letter from his wife. “Dear husband, you wouldn’t believe what happened. Some men came with shovels to the house and dug up the back garden.”

The prisoner writes back: “Dear wife, now is the best time to plant the lettuce.”

Three prisoners are being executed via firing squad. The police are about to execute the first one when he yells EARTHQUAKE! The police go running and the prisoner escapes before the police realize there’s no earthquake.

Right before they execute the second one, he yells TORNADO! Of course, there is no tornado, but the prisoner escapes before the police reralize that.

It was turn for the third to be executed. The police go “Readyyy… Aim…”. Then, Frank yells “FIRE!”

There were these three Virginians who went to Mexico and got drunk. They got drunk there and woke up in a Mexican jail. They asked the guards what they were in for. The guard said the only thing he knows is that they were to be executed for their crimes.

The day comes and the first guy gets strapped to the electric chair. The guard asks if he has any last words. The guy says ” I’m from Liberty University and I believe in the almighty power of God to prevail on the innocent.” The guard flips the switch and nothing happens so they let him go.

The next guy gets strapped in and the guard asks for his last words. He says ” I’m from the University of Virginia and I believe in the almighty power of justice to prevail on the innocent.” The guard flips the switch and nothing happens so they let him go.

The next guy is brought in and he says ” I’m a Virginia Tech Electrical engineer and I tell you you’ll never electrocute no one if you don’t connect those two wires.”

Things you shouldn’t say to a police officer:

1. I can’t reach my license unless you hold my beer.
2. Sorry, Officer, I didn’t realize my radar detector wasn’t plugged in.
3. Aren’t you the guy from the Village People?
4. Hey, you must’ve been doin’ about 125 mph to keep up with me. Good job!
5. Are You Andy or Barney?
6. I thought you had to be in relatively good physical condition to be a police officer.
7. You’re not gonna check the trunk, are you?
8. I pay your salary!
9. Gee, Officer! That’s terrific. The last officer only gave me a warning too!
10. Do you know why you pulled me over? Okay, just so one of us does
11. I was trying to keep up with traffic. Yes, I know there are no other cars around. That’s how far ahead of me they are!
12. When the Officer says “Gee Son….Your eyes look red, have you been drinking?” You probably shouldn’t respond with “Gee Officer your eyes look glazed, have you been eating doughnuts?“

One day a Virginia state patrolman pulled a car over for speeding about 20 miles from the Florida line on I-95. When the officer asked the driver why he was speeding, the driver answered that he was a magician and juggler and was on his way to Jacksonville to do a show that night and didn’t want to be late.

While the man was doing his juggling act, a car pulled up behind the patrol car and a drunk got out and looked at the show, and then went to the patrol car, opened the back door and got in. The patrolman saw him do this and went over to his car, opened the door and asked the drunk what he thought he was doing. The drunk replied, “Just go on and take me to jail….. there’s no way in the world that I can pass that test.”