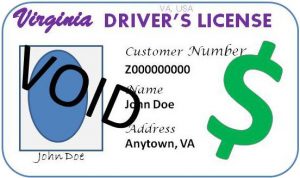 A legal battle is proceeding at the U.S. District Court for the Western District of Virginia between four low-income Virginians and the commissioner of the Virginia Department of Motor Vehicles. Last July, the Charlottesville-based Legal Aid Justice Center, who are representing the four plaintiffs along with McGuireWoods Law Firm, filed a lawsuit against the Virginia’s practice of suspending driver’s licenses for inability to pay court costs and fines.

The Plaintiffs are low-income Virginia residents who have had their driver’s licences indefinitely suspended for failure to pay court costs and fines which they could not afford. The complaint states the suspension of their driver’s licences was automatic with no inquiry to find out if the plaintiffs were unable to pay, or simple unwilling to pay. It appears they did not have the means to pay and the DMV suspended their licenses regardless.

The court is being asked to order an injunction against the DMV Commissioner in his official capacity, and order the DMV to stop suspending licenses when no one has taken into account ability to pay. They are also asking court to waive reinstatement fees for these folks, which are typically $145. Additionally, they’re asking the court to declare that this practice is unconstitutional under the 14th amendment to the US Constitution.

Virginia has been suspending driver’s licenses for failure to pay jail fees, court costs, and fines since 1971 when the law was passed by the legislature and signed by then-Governor Linwood Holton. As I’ve previously detailed, this practice is unethical. It oppresses the poor and indirectly negatively impacts all Virginians. The suspension of a driver’s license should be applied to those shown to be a danger behind the wheel, not those unable pay a fee.

While driving is a privilege and not a right, it’s a necessity in most people’s lives, and suspending that privilege equates to suspending their livelihood. It often takes away their ability work and function in a normal capacity. A restricted license can be obtained to allow them to drive to work and other necessary commitments, but that comes with more court fees and costs, so it’s usually not an option for the poor.

There are three reasons why this should be stopped. The first is our government should adhere to the same laws and rules of common decency which individuals and businesses abide by. As a business owner, if a client doesn’t pay the bill, my recourse is to file a civil suit and obtain a judgement. If payment is still not received, the only other means is wage garnishment or ruin their credit. That’s where it ends. Now imagine someone doesn’t pay the phone bill. But instead of just having the phone service cut off, the phone company has that person’s electricity, water, and cable discontinued until the bill is paid. That kind of thuggish behavior cannot even be imagined from a business, yet we tolerate it from our government.

The second reason is it just doesn’t work and the negative repercussions have a cascading affect on society. When someone’s driver’s license is suspended, that person’s ability to work is drastically diminished, which all but insures the debt will not be paid. By impeding the person’s ability to be employed, this negatively impacts the entire community by encouraging unemployment, which means more government assistance programs will be tapped.

It also places the person in a higher-risk category of being arrested. As a bail bondsman, I see how this policy keeps the working-poor from getting ahead. For people with suspended licenses, when they have to be somewhere, they will often take the chance and drive with the rationale that they won’t get pulled over. Sometimes, they get pulled over or involved in an accident and another arrested ensues. The injustice of this policy is it creates criminals where there is really no criminality. Most people’s impression of a criminal is some who purposely causes harm to another: a purse-snatcher, a thief, etc. A person driving on a suspended license just wants to get to work or to pick up their child, etc.

The third reason why it should be stopped is it’s simply criminal, albeit a bit more sanitized. In organized crime, when a debt is not paid, the “muscle” is sent out to encourage the person to pay. The encouragement may be in the form of breaking fingers, kneecaps, or something much worse. Stereotypically, these enforcers may have names like Rocko, Sammy-da-Bull, or Eddie-da-Nose. After a meeting with the “muscle”, it often means the person is unable to work, but that’s their problem.

Our state is using the same tactic with the same heartless attitude, just without the physical pain and violence. In the Virginia Commonwealth analogy, the DMV is the muscle, Eddie-da-Nose. The courts and government agencies are like the crime bosses who run the operation, and the politicians who condone these laws are like, well, the politicians who condone these laws.

With that stated, I would like to thank and applaud the Legal Aid Justice Center and McGuireWoods. While many claim to fight for the poor against the powerful, you’re actually doing it. Thank you. This case has a direct impact on those struggling to get by; however, should the court rule in favor of the Legal Aid Justice Center, all Virginians would benefit and should support their efforts.

To keep abreast of this case, visit https://www.justice4all.org/2016/07/06/lawsuit-challenges-dmvs-license-suspension-policy/.

The Legal Aid Justice Center performs a variety of needed services and programs throughout Virginia which deserve our support. To donate, please visit: https://www.justice4all.org/giving/support-our-work/.