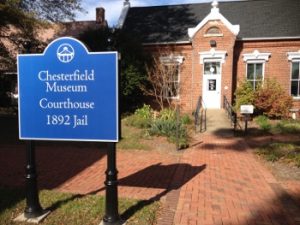 As a bondsman serving the greater Richmond area, I’ll admit I’ve become a bit of a criminal justice nerd. In fact, I took time out of my Saturday to tour the Old Chesterfield Jail, which is part of the Chesterfield County Museum, located at the Chesterfield County Government Center Complex. Not that there’s anything weird or wrong with spending part of the weekend touring an old jail. It’s just that I’m the only one I know who’s done it. And yes, I enjoyed it and thought it was interesting. So much so, that I’m writing a blog about it.

My guide was a very nice and knowledgeable young woman by the name of Katie. She did a fantastic job of filling me in with stories and insights of the old Chesterfield jail, which were informative and entertaining.

So now I’ll summarize what I saw and learned there. Who knows, maybe you might choose to tour the old jail yourself.

Beside the Old Chesterfield Jail, there are two jail sites on the Courthouse Green. The first jail was built here in the 1700s and housed inmates until 1842. It’s marked by a pattern of bricks on the ground. Early on when America was still under the England’s rule, seven baptist preachers were jailed here for preaching without licenses. Once jailed, they continued to preach to their followers through the windows. After a 12-foot high wall was then built, they still continued to preach after their followers waved a flag above the wall to signal to the preachers that they were there. They simply spoke loud enough for the people on the other side of the wall to hear. In 1925, a Monument to Religious Liberty was raised in honor the preachers by the Chesterfield Baptist Community.

Then in 1842, the second jail on the site was built. Known as the “Bastille”, it was a one floor, four room stone building. Early on, this jail was used as debtor’s prison. It was in use for almost fifty years before being condemned in 1890.

Now referred to as the “Old Jail”, the third jail was completed in 1892. It was built using the granite stones from the Bastille Jail as the first floor. 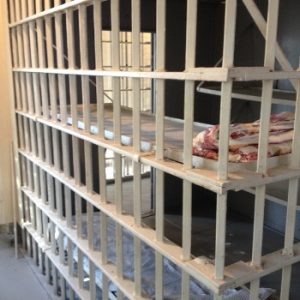 The second floor, with it’s iron-barred jail cells, was added to house the inmates. It served as Chesterfield County’s jail for the next seventy years, primarily detaining inmates for overnight stays. Inmates requiring longer stays were transferred to Henrico and other local area jails.

In terms of holding inmates, it reportedly didn’t get much action until 1936, simply because there wasn’t much crime in those days in Chesterfield County. However, the defendant from one of the more famous Chesterfield crimes was housed in this jail. It was Henry Beattie, who in 1911 was accused and later found guilty and executed for the murder of his wife.

The first floor of the Old Jail is the exhibit area, where many interesting items are displayed and illustrated. At the center of the room is a case with the items used past officers. Of particular interest was what was called a come-a-long chain. It served in a similar capacity as handcuffs. Consisting of a small chain about ten inches long, where one end is a wedged T with an indentation for a finger to be placed in. The other end of the chain consisted of a T which was held by the officer. The defendant’s finger was placed in the indentation and the chain was wrapped around the wrist. When the officer pulled on the chain, it would twist the finger, thereby inducing pain. Other exhibits include uniforms, past automobiles used by the county police, and other miscellaneous items.

But what I found most meaningful was the memorials of five Chesterfield police officers who died in the line of duty:

Each officer has a plaque with their picture, accompanied with a eulogy of their service and life.

There is more to the Old Jail which is not covered here. But I hope I’ve done it some justice with this article. If you have some extra time, I would recommend visiting it for anyone who has a historical interest.