Whenever I have a personal “brush” with the law, I note it here in my blog post. I’m not exactly John Dillinger, so to keep this blog active, I mostly write about other topics. But alas, with the help of the Chesterfield police, I have another brush-with-the-law post to write. 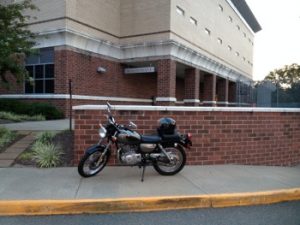 Later on that day, I drove my motorcycle again. I happened to be stopped at an intersection making a left turn. This was again on Hull Street. There happened to be another police officer, this time on a motorcycle, who was stopped at the light opposite of me. After I got the green light, I took off. Sure enough, he pulled in behind me and flashed his lights. I pulled in to a parking lot. He asked if I know my inspection had expired. Pulling the ticket issued to me earlier from my pocket and handing it to him, I told up until a few hours ago I hadn’t. Since it was the within 24 hours of my previous ticket, he didn’t write me a new one. We exchanged pleasantries and went on our merry ways.

Fast forward to the court date. Having taken my motorcycle in for the inspection and retaining the proof of it, I brought it to traffic court. When the judge called me up and it was established I complied, she dismissed it and then said there would be no fines, just the court fees. So, the officer who insisted there would be none was WRONG, it was $62.

So, here is my take-a-way regarding the Chesterfield police and court fees. First, the Chesterfield Police are extremely well-trained in spotting expired license inspection stickers. Second, they shouldn’t be giving the people they’re ticketing false information. I would think that this is something the officer would know. He’s had to stand before judges who dismiss the minor traffic cases routinely. While I’ll give him the benefit of doubt that he was simply wrong, I makes me wonder if he was lying to me so it would go smoother at that moment.